Today we are going to discuss our peeves regarding music.

I love music, practically all kinds of music. In fact, to date…I have sold music to literally tens of thousands of people. Music is an extension of the heart and soul. Depending on the circumstances, music can tug at one’s heartstrings. Music can uplift our spirits, bind us together as a group. Music is the chorus of a movie, it is the pulse and timekeeper of a story, letting us know when it is time to laugh, time to cry and time for the story to end. Music can be the reason we get up in the morning and the lullaby that puts us to sleep. Music is all things to many of us. Unless it sucks.

As we are unique, so is our music.

Music, like aromas are different to us all. What smells like rose petals and daffodils to one person, can stink like feces and garbage to another. Take classical music. I enjoy classical music, it soothes my nerves and allows me to relax. I have known people who hated classical music so much, that they compared it to being stuck in a beehive, the buzz of the bees amplified so much that their ears hurt.

I enjoy listening to jazz, rhythm and blues. 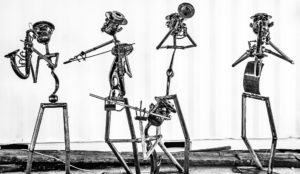 I was introduced to jazz as a young adult. The Manhattan Transfer was my first taste of jazz, along with Peabo Bryson and John Coltrane. It was an eclectic melody that called to me. I can listen to jazz all day. Jazz evokes picture after picture in my mind, allowing me to focus on my muse so that I can write. My wife dislikes jazz. She finds the soul-bending croon of a saxophone, a screech that grates on her nerves. I wish that she could discover what I discovered, just how fun jazz is.

Ever wonder why whenever you picture someone who loves jazz, you imagine some preppy pisspot with their finger in the air? Jazz seems to always be associated with wealth and upper crust society. Ask anyone from New Orleans. Those who really know jazz, understand that it is all about learning how to speak with an instrument. Oh! Of course, you may meet people (classical music nazis), who state that jazz is NOT music, but a cacophony of horn instruments brought together with someone banging a drum and a couple of guitars. I define jazz as an eloquent symphony of artistic sound, a painting that is dabbed onto a canvas with a feather, rather than smeared onto paper with a brush.

My secret admiration of country music.

You have to be a very special person to love country music.

There are probably more people outside of the United States who love country, than all the people in the south who idolize it as gospel. My wife cannot stand country music. I have never told her that as a kid, growing up in Japan in the mid-1960’s, I was listening to it all the time on the Armed Forces Radio and Television Service (AFRTS). American television broadcasts were sparse, but country music sure wasn’t. I remember listening to a song that has gone unnamed for over 30 years, but I still remember that it was about a guy who lost his wife, kids…even his dog. I felt terrible for him. After my family returned home to the United States, I found solace listening to “John Denver” and tapping my toes to bluegrass, played by “Salt and Pepper”, a Colorado bluegrass band that is no longer together. I also remember having a serious crush on Dolly Parton

(I think all young boys had a secret crush on her) as well as many other female country music artists. Must have been those tight jeans…

I love rock and roll.

My wife and I do agree on one thing: Rock and Roll music. We love listening to it. Rock and Roll changed our lives. There are many young people today that become excited, when I tell them about what it was like to be part of the music scene, back in the early seventies in Ann Arbor, Michigan. Music was a driving force behind how we lived our lives. We ate to our music, we smoked to our music and we danced to our music. “Poco” was already becoming a distant memory by 1973. Yes, “Jimi Hendrix”, “Edgar Winter Group”, “Bob Dylan”, “Jim Croce”, “Bob Seger” and “Black Oak Arkansas” were playing the musical messages that we listened to. What many of us will not admit to doing, is that we secretly cry in our swill to “The Carpenters”, get down with “Herb Alpert” and dream of Rocky Mountain High’s with “John Denver” in our bedrooms, with the lights off.

My education in classical music.

My grandmother introduced me to Beethoven’s Fifth Symphony when I was five. Every time my grandmother would visit, I would be treated to a new classical composer. She played music from Handel’s “Messiah” to Bach’s “Cantata, BWV 147, Jesu, Joy of Man’s Desiring” I became entranced with melody. There were so many classical composers who caught my attention, of those Pachalbel “Canon in D Minor”, Vivaldi’s “Four Seasons” and Tchaikovsky’s “1812 Overture”. Man…I have no clue as to why there are so many people who don’t care for classical music. It has its own style, its own language as well as its own emotion.

My confusion with Rap and Hip Hop.

When it comes to rap, I always say, “Peace…out”. I care very little for Rap, because it is not jazz. My feelings do not mean that Rap is bad, only that I do not care for it. I cannot count the number of modern musical scores that featured Rap. Those compositions fit extremely well with the visual stories that I experienced. In those cases, the Rap score became an outstanding feature of the movie, enhancing my experience of the plot and adding a unique dialog to the movie. There are many artists that I have admired, such as DJ Kool, Gil Scott-Heron and Melvin Van Peebles. I listened to the music of Isaac Hayes every so often, Snoop Dogg, Ice Cube and Jay-Z.

There is one thing I do want to say about Rap, that I experience quite often. That experience is when I am out on the road, listening to my music in my vehicle and another driver pulls alongside of me, who has installed speakers so powerful that the Rap the driver is listening to, literally overpowers what I want to listen to. There are people who would smile or laugh as I am making this statement. There are people who would state that if I want to listen to my music in my vehicle, that I should purchase speakers that are more powerful than another driver. I do not agree. Consider someone forcing you to listen to something. I do not understand the need to play incessant chanting so loudly that it is a disturbance to everyone within earshot.

I feel like I want to administer a Vulcan neck pinch, like Spock did in Star Trek IV, The Undiscovered Country or fashion my own “off” switch, such as an Electromagnetic Pulse (EMP) gun and using it on one of those vehicles. I can see myself now…taking careful aim at the butthead’s car that has awakened me out of a sound sleep at 3 A.M., pressing the trigger to hear…silence. I can imagine him in his vehicle as he says, “What the f***?” Then listening to the shouts and eventual, blissful silence because his entire electrical system has been fried to a crisp. No more noise…

You don’t have to be a special person to enjoy New Age music. For those of you who have not been exposed to New Age music, think back to the soundtrack for “Chariots of Fire”. That is New Age music you are listening to, bubba…the artist is none other than the Greek composer, Vangelis. If you ever saw “Lord of the Rings: The Fellowship of the Ring”, you enjoyed the music of Enya. “Return to Innocence” was a song by Enigma, also the closing theme to the Disney film “Man of the House”, and if you ever saw the movie “Highlander”, you heard “Bonny Portmore”, by Loreena McKennitt.

I think Wikipedia did a great job with this description: “New Age music is a genre of music intended to create artistic inspiration, relaxation, and optimism. It is used by listeners for yoga, massage, meditation, reading as a method of stress management to bring about a state of ecstasy rather than trance, or to create a peaceful atmosphere in their home or other environments, and is associated with environmentalism and New Age spirituality”.​​​​​​​​​​​​​​​​

Thus, ends this week’s peeves about music. Next week: Peeves about the Mail